A short intermezzo from all FPGA-related stuff, this time we deal with an 8051-based USB device. This blog post describes how I converted an ISDN modem (with a USB connection) to a USB-to-UART cable.

During my vacation at my parents' house, I wanted to access the UART on the Ultra96 board to investigate the Linux boot procedure. Surprisingly, I did not manage to find a Raspberry Pi or anything else which can talk UART, but I found a box with old electronics. Among old phones, computer motherboards, GPUs, and other relics of the past I found a PCB with a USB and an RJ45 connector. My sixth sense for electronics made me think that this is a good starting point for a USB-to-UART cable; the device already has a USB, and there will likely be a UART port somewhere.

Note: no half-sane person would go this way to implement a simple USB-to-UART bridge. If talking UART from your computer is your principal objective, just buy a cable, or use a Raspberry Pi.

The first thing I did is plugging the device into a computer, mainly to verify that it is still somehow alive. The following was printed out in the dmesg output:

We see that the USB works, and we also got the product name (Eicon DIVA USB). A quick search on the internet revealed that this device is an ISDN modem, which matches the observation, an RJ45 socket and the date code of June 1999.

There is even a web page dedicated to various ISDN cards, where the main characteristics of this device are listed: ISDN Cards Central: Eicon Diva USB 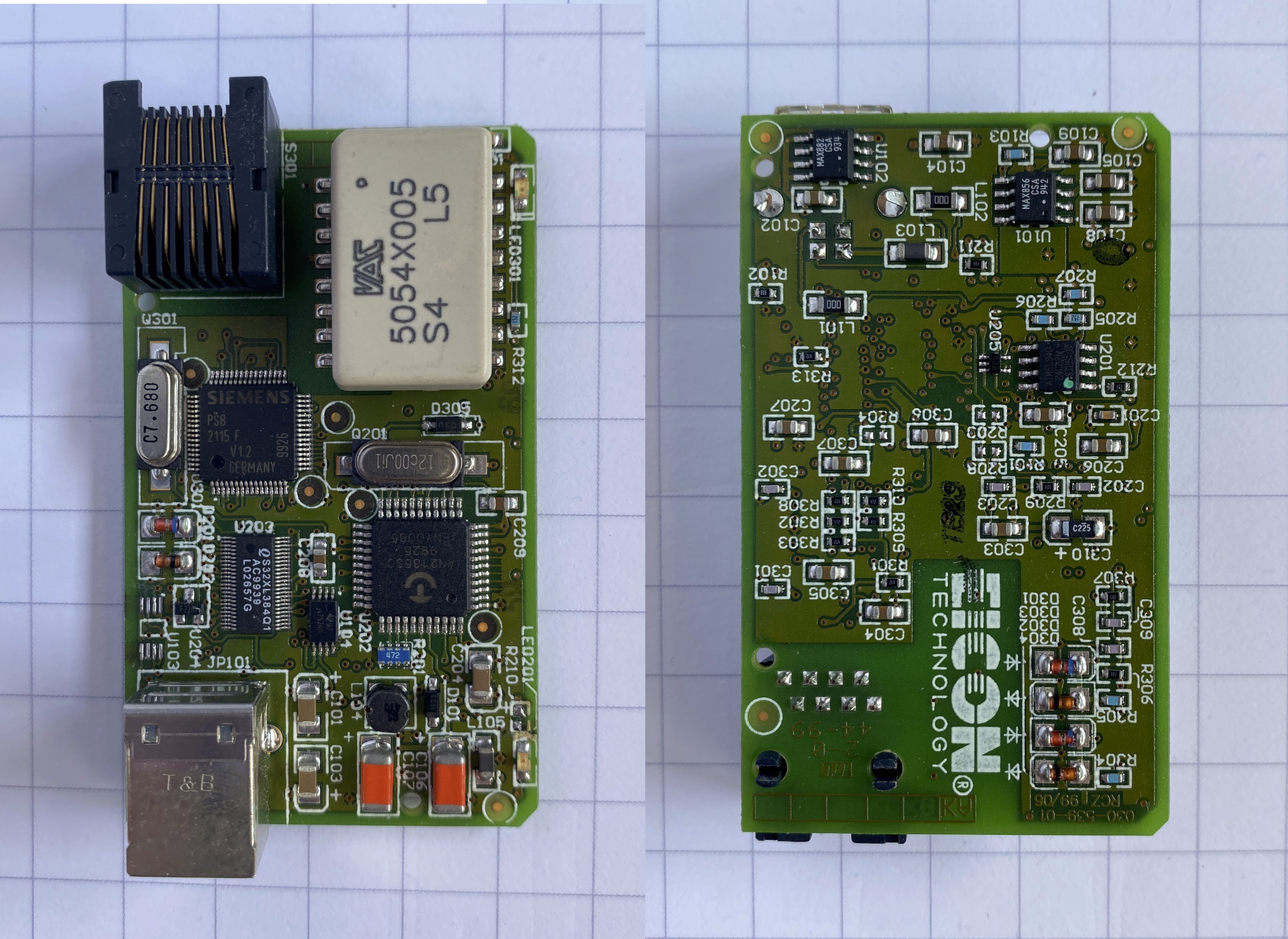 There are several easily-identifiable components on the PCB:

The main microcontroller on this board (AN2135SC) was designed specifically to simplify the development of USB-based devices. EZ-USB Technical Reference Manual is from May 2000, while the USB 1.1 standard was released in August 1998. The TRM goes to a great length to explain the advantages of the USB ("Plug and Play") and also serves as an introduction of the protocol itself.

At this writing, all that firmware is statically linked into the appropriate mini-driver.

Since there are no BGA components on this board, and the main microcontroller has only 44 pins, one can easily use a multimeter to reverse engineer the connections between the most important components.

I gathered the obtained knowledge in the schematics below:

From the schematics it is clear that one can easily reach the UART port with some small modifications to the board:

With hardware in place, it was time to write some firmware for the microcontroller. I managed to find a project on GitHub, titled ezusb-firmware, which can serve as a starting point for custom developments. It is licensed under GPLv2 or later and uses sdcc compiler.

After modifying the code to match the pinout on the (modified) board, and compiling the code with sdcc a HEX file is produces. This gets then easily downloaded to the board with the aforementioned fxload utility:

With the proverbial LED blinking, I was able to confirm that this method of programming the microcontroller works and that the firmware project works correctly.

I have continued the development by adding a UART-related code and later implemented a method to retrieve the UART buffer over the USB and to transmit the data over the UART from the USB. The code can be found in ezusb-uart/firmware.

As the last step, I hacked together an example from the libusb library and some code to manage the receive and transmit buffers. Ideally the terminal management (using the termios API) would be more elaborated, ideally one would also use a dedicated library for such a task. But since the goal was just to capture some data from the Ultra96, the current implementation is sufficient.

The code is available in ezusb-uart/software.

Shown in the screenshot below is the output of ezuart utility when connected to the Ultra96 board: 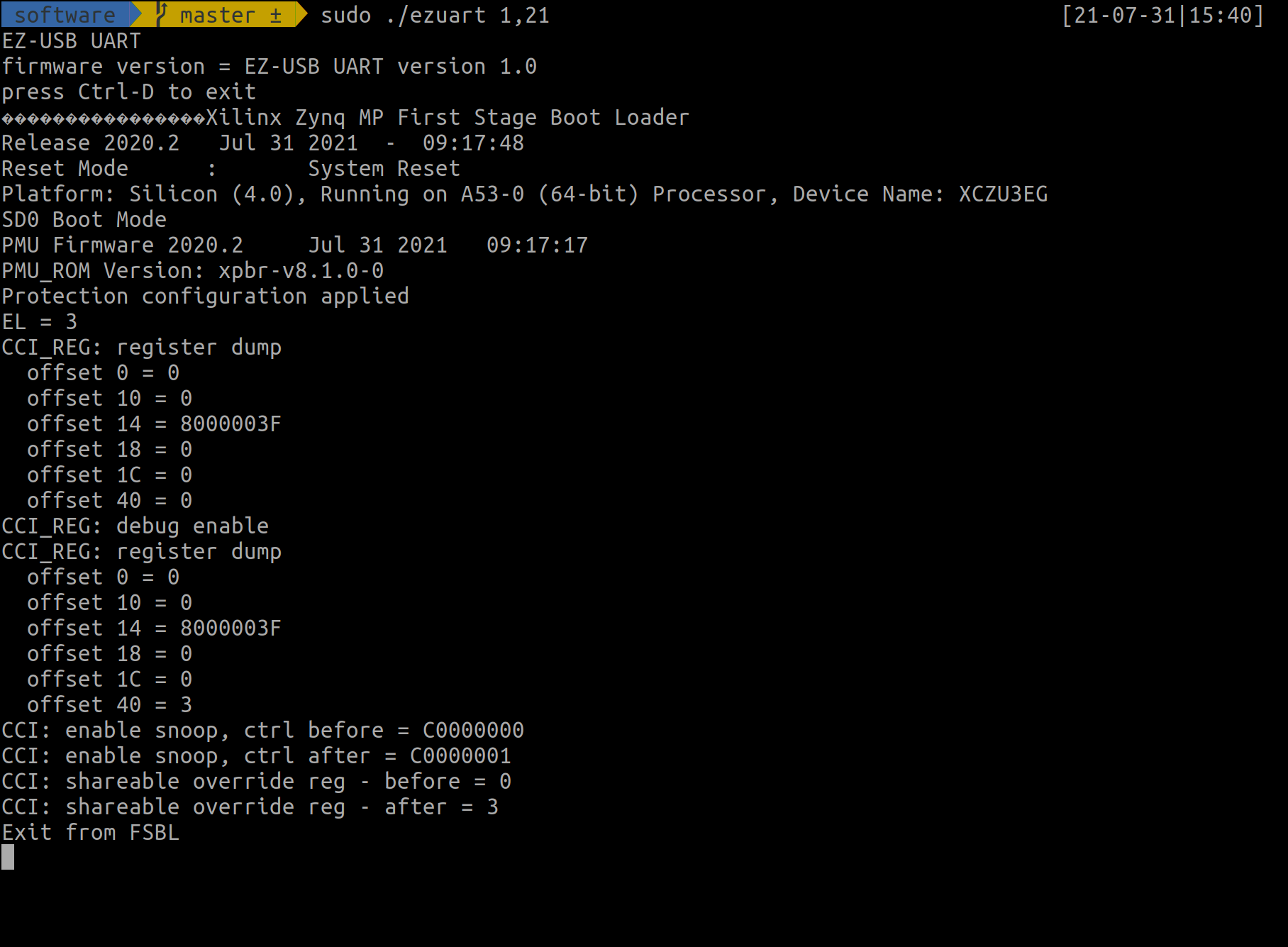 Without too much effort, I was able to convert this ISDN modem to a USB-to-UART cable. Several factors contributed to this:

There are a couple of limitations, the most jarring one is that this microcontroller does not support 115200 baud operation, making it not really suitable as a general-purpose UART cable.

Nevertheless, I would classify this project as a success - I have managed to convert an old piece of junk to a device, which can provide some insight into the boot procedure of the Zynq on the Ultra96 board. 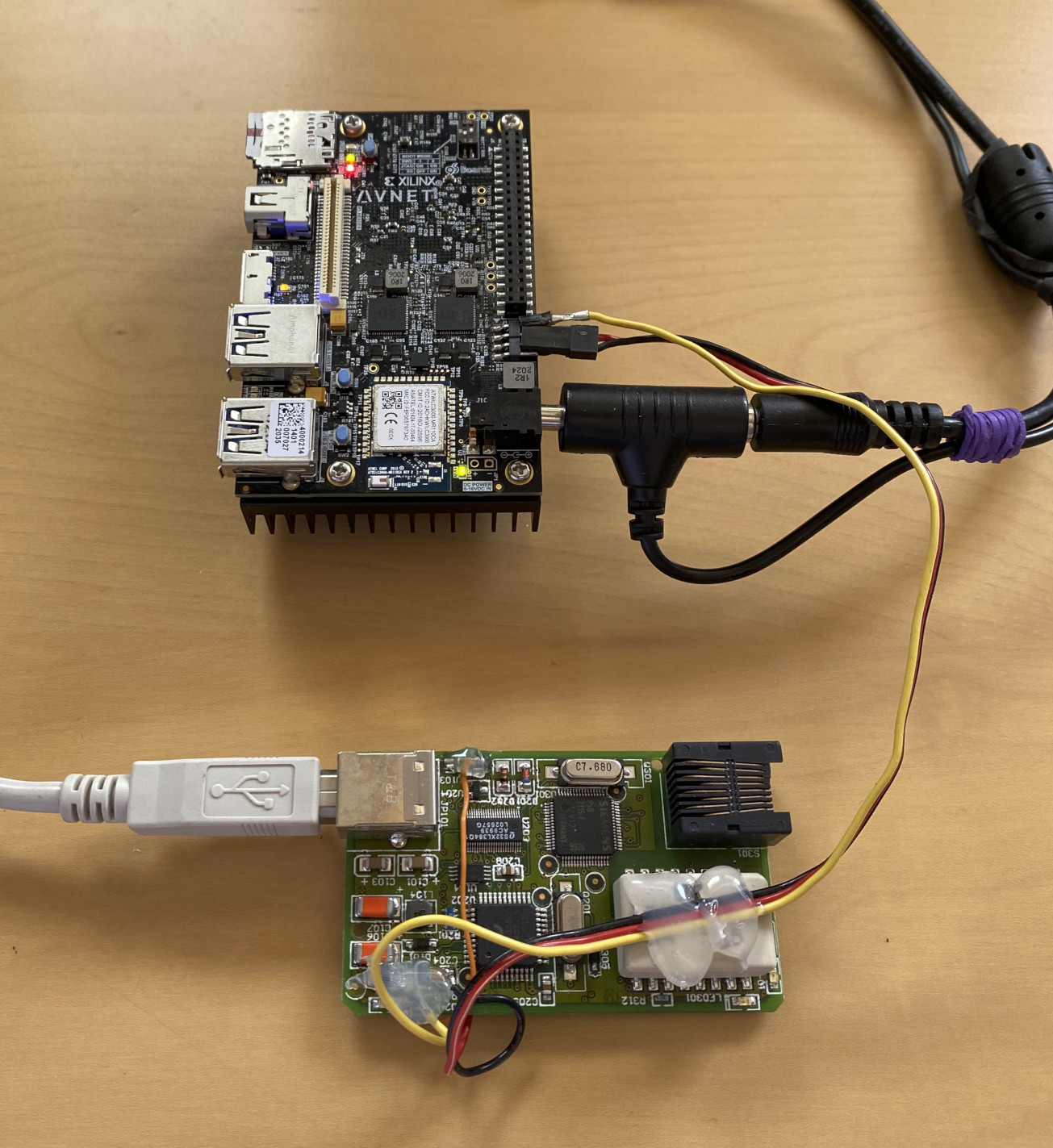